by Jo Bartosch, freelance journalist campaigning for the rights of women and girls 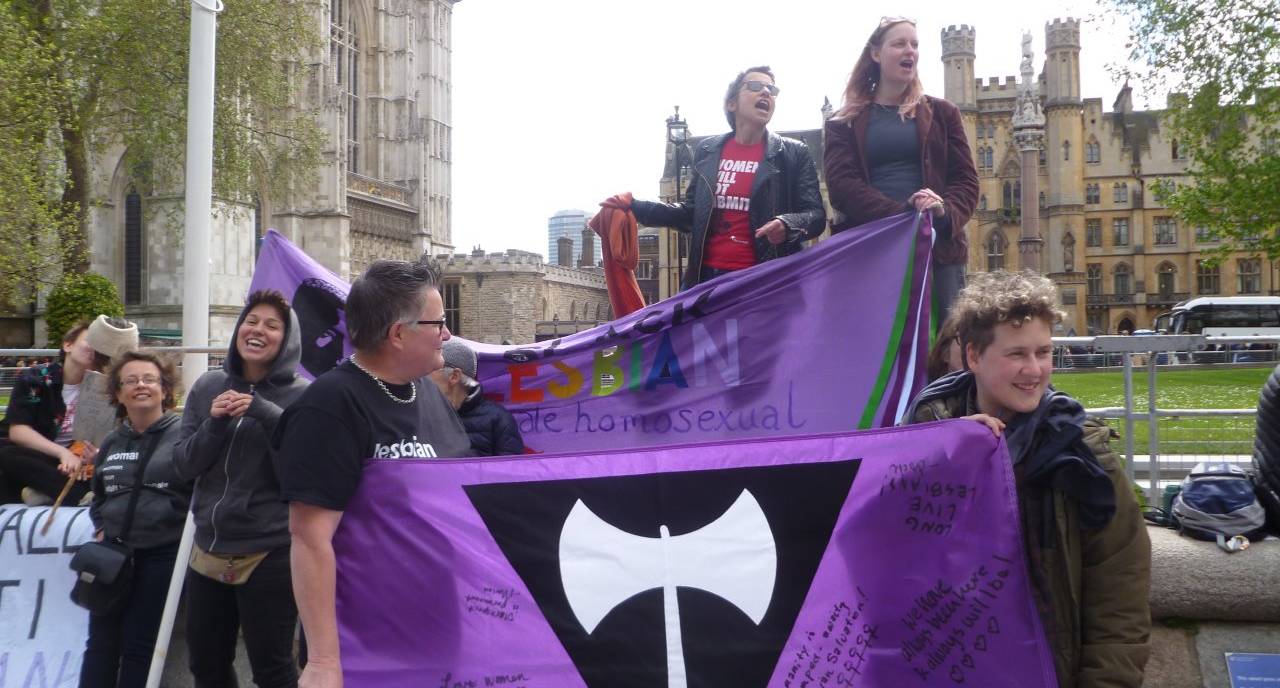 “Hello Stonewall! We are lesbians, the old-fashioned type that don’t have penises!”

shouts protestor Dr Julia Long. Others in the group laugh in agreement, before continuing to chat and hand out leaflets outside the QEII Centre in central Westminster.

Organised by women’s groups, including Resisters and the Lesbian Rights Alliance, the ‘Stonewall is Anti-Lesbian’ protest fell on 26th April, Lesbian Day of Visibility. The aim was to bring attention to what the protestors see as the betrayal of lesbians by the UK’s biggest Lesbian, Gay, Bisexual and Transgender (LGBT) advocacy group, Stonewall. Inside the venue, where delegates had paid between £269 – £429 per ticket, Minister for Women and Equalities, Secretary of State MP Penny Mordaunt took to the podium, seemingly unaware of the women protesting outside. 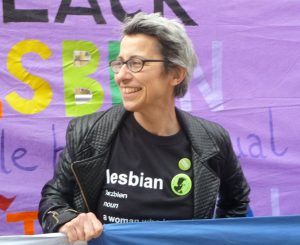 While organisations from Disney to Lloyds are keen to cover their branding in rainbows to signal their ‘progressive’ corporate credentials, LGBT communities themselves have never been more fractured. Increasing numbers of lesbian, gay and bisexual people ‘coming out’ all over again, but this time to distance themselves from the ‘T.’

Dr Long was one of the key organisers of Friday’s demonstration. A Stonewall critic within the LGBT community, she explains why she does not feel lesbians are served by the organisation:

“Stonewall aggressively champions ‘self-identification’, the notion that any man is a woman if he says he is. This introduces the ridiculous notion that men can be lesbians – that there is such a thing as a ‘lesbian with a penis’ – and clearly conflicts with any claim that the organisation represents lesbians. It is very harmful to inflict this fiction on lesbians and expect us to sit back and accept it.”

It was 2015 when Stonewall CEO Ruth Hunt announced that the organisation would include trans people. In the four years since, Stonewall have powerfully advocated for the interests of transgender people, establishing a ‘Trans Advisory Group’ and campaigning in favour of the government proposal to reform the Gender Recognition Act. The timing of the addition of the ‘T’ is interesting, with some of Stonewall’s detractors suggesting this was an attempt to sustain funding and relevance after same sex marriage was granted in 2014.

While the intent to include trans people might be laudable, the impact on lesbian communities has been significant. Dr Lynne Harne of the Lesbian Rights Alliance explains:

“as lesbians we usually have to organise in secret groups in order to keep safe. There are now very few dating sites which are for lesbians only, that is females who are same sex attracted. Younger lesbians frequently feel pressurised into dating males who claim to be lesbians and as research shows, some have experienced sexual assaults and rape as a result. Lesbians are affected whenever trans invade women-only space, which by law are supposed to be single sex spaces.” 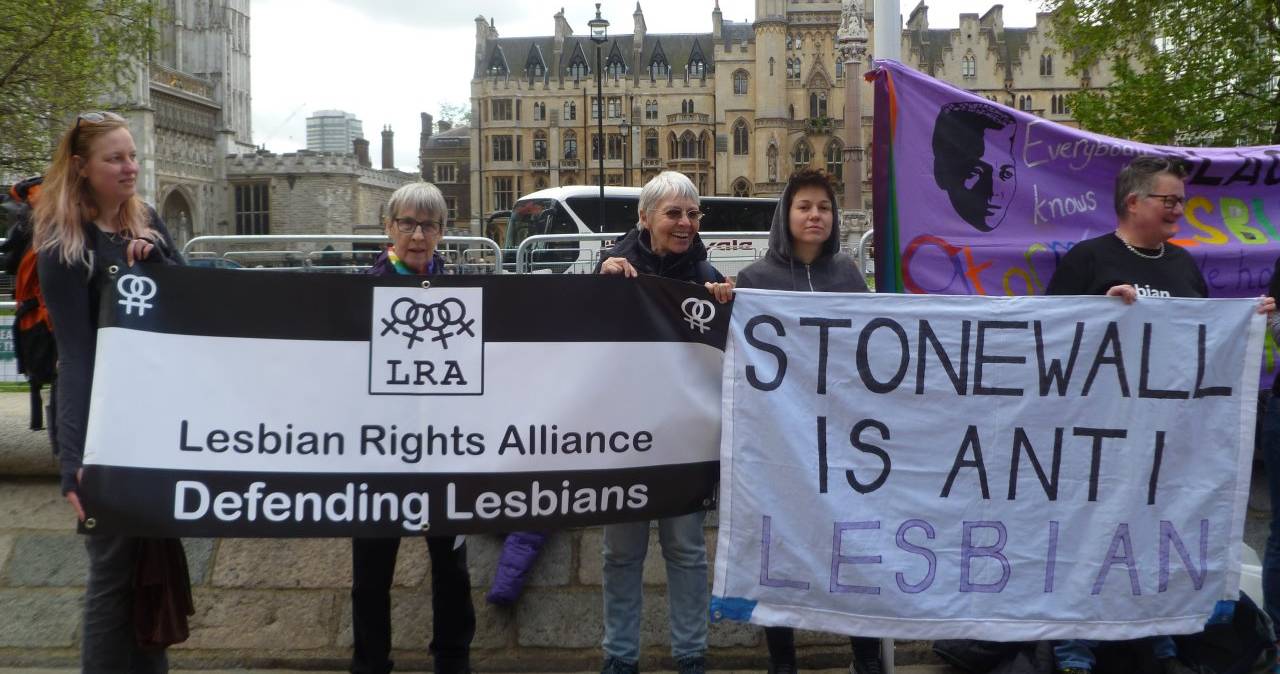 Lesbians, gay men, bisexual people and indeed trans people who have voiced concerns about the pairing of ‘gender identity’ with ‘sexual orientation’ have been ignored and dismissed as transphobic by Stonewall.

While Stonewall’s support of transgender politics poses a problem for adults, the impact on young lesbians has been devastating. Recent resignations from the Tavistock Gender Identity Development Service, covered by The Times, recorded clinicians’ concerns that ‘potentially gay children are being sent down the pathway to change gender.’

“Young lesbians are being fed this myth that they are ‘born in the wrong body,’ an ideological position with no evidence to support it. This notion is used to justify terrible harms being done to them, including all the health risks of breast-binding, lifelong hormone regimes, and mutilating surgery such as double mastectomies, hysterectomies, skin grafts for ‘phalloplasties’ and so on. It is unbelievable that an organisation that claims to represent lesbians is not only going along with all this, but aggressively promoting it.” 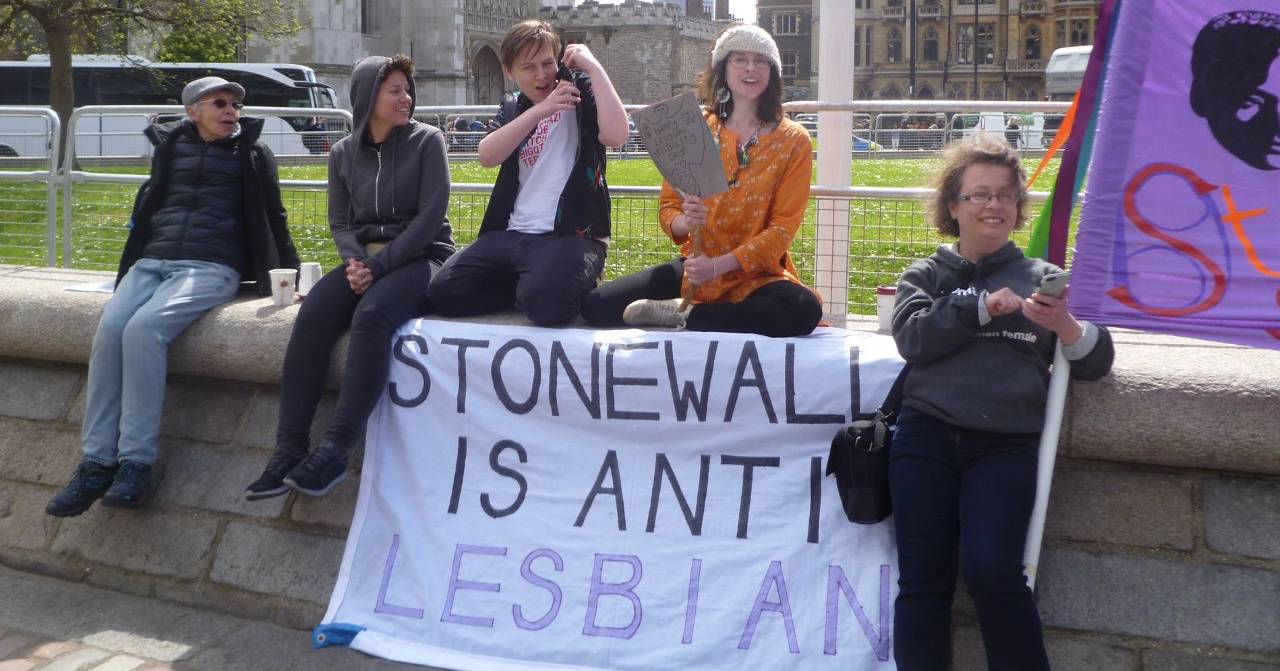 2019 marks thirty years since Stonewall was founded, and the organisation has undoubtedly made great strides in increasing acceptance of LGBT people. But the women who protested on Friday, and all of those who refuse to accept that there is such a thing as a ‘lesbian with a penis’ represent an inconvenient truth for Stonewall.

There was something telling about Minister for Women and Equalities Penny Mordaunt addressing the paying delegates inside, while the people Stonewall ought to advocate for were effectively ‘Stonewalled’; with no option but to wait outside in the cold. Arguably Stonewall now exist to sell the image of acceptance, rather than practice it. Stonewall’s strapline is ‘Acceptance without Exception’ unless one happens to believe that lesbians don’t have penises.